This originally was commonly called Chinese Gooseberry but no one wanted to eat it! Gooseberries are notoriously sour unless you find the right cultivar but they kept many a serviceman alive in the jungles of S.E. Asia and China during WW II. When New Zealanders returned home, they remembered the fuzzy fruit and began raising it. When no one was buying it, they decided upon a Madison Avenue approach and started calling it ‘Kiwi’ after an indigenous bird. No problem then!
If you want to grow your own kiwi, give it plenty of room as a vine easily gets to 20’ and then double it as you’ll need to grow two of them – one female, one male. Or look for the cultivar ‘Issai’ that can produce fruit on its own. 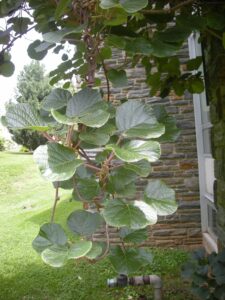