An Exciting Week In The Garden Concludes

Last week was spent removing several large shrubs and small trees from the Garden’s future parking area. These plants, each weighing several hundred pounds, all found a new home in the Garden. What an exciting week!

Luckily, the City of Shoreline hired an Earthcorps crew to help with this hard work. Despite unpredictable weather, which included hail, lightening, and monsoon-like rain, they did a great job with great enthusiasm.

The Earthcorps crew also dug and prepared the very large Rhododendron auriculatum shrubs for moving later in the year. 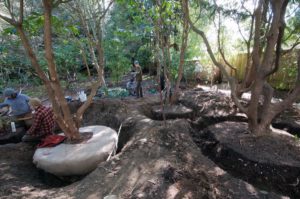 Things are quite muddy after all the rain, but the plants are now settled into their new homes. Come visit them this spring!