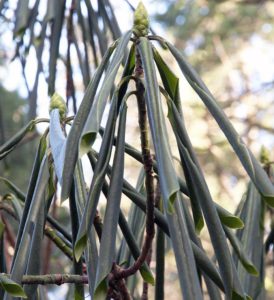 You may have noticed in our recent cold and dry spell that the Rhododendron foliage at KBG and in your own garden had quite an overt response. Thermotropism, or plant movement in response to the stimuli of temperature change, is the cause of the leaf curl and droop seen on our Rhododendrons, usually in the early morning.

Although much research has been carried out through the years to discover the physiology and reason for this adaption, the latest theory is that there are actually two different movements occurring. The first mechanism is leaf curling, where the edges curl and cup inward, occurs when the temperature goes below around 32 degrees F. It happens when the leaf itself reaches this temperature and helps protect the more vulnerable leaf underside. Leaf upper sides are covered with a waxy cuticle, which offers more protection to cell membranes. Rhododendron leaves can freeze and thaw multiple times and survive, but only if the thaw is drawn out and gradual. Curling, by reducing the surface area, slows thawing down.

The other thermotropic response is leaf droop, which is a change to the angle the leaf is held at and usually happens at a lower temperature, around 25 degrees F. (Usually the coldest temperature of the day is just before or at dawn.) Leaf droop happens when foliage becomes vulnerable to irradiation. Most Rhododendron species have adapted to being covered by a deciduous canopy during their growing period, but this protection from excess light and temperature extremes is gone in the winter. The leaf cell membranes responsible for converting light into energy are particularly vulnerable and can be permanently damaged. By lowering the foliage to a vertical position, both excess cold and light are reduced. As temperatures rise later in the day, foliage slowly returns itself to its normal position. In the past, it was believed that curl and droop were also to prevent water loss and desiccation. Now the theory is that these adaptions are not acting to prevent this and in fact, leaf stomata (pores on the surface) are closed in the winter.

Plants are always reacting and changing, but what they are doing is not always visible to the normal eye. We are lucky to be able to observe this impressive process so easily!