Early Arrivals from the Soil: Dichelostemma and Triteleia 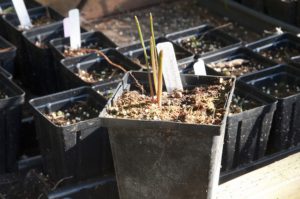 The official beginning of spring is still a month off, but there are many perennials grown in MsK Nursery that emerge in late winter/early spring.  Here are two of our early arrivals.

This is a perennial from a corm (a scaly underground food storage organ modified from a stem) whose foliage emerges between February and March. After this foliage withers, a stem or stems will emerge in April to June and the plant will flower. The flowers are dense clusters arranged in umbels and are bluish-purple. In the wild they occur all the way from the Sacramento valley to British Columbia. Normally growing in evergreen forests or grasslands, with good drainage they are fairly easily grown in gardens in sun or part sun. They like moisture in the Spring and prefer to dry out later in the Summer. Native Americans called it Ookow and it was a source of starchy food for them.

Closely related to Dichelostemma, Triteleia also has flowers born in umbels, but are they are much more widely spaced. They range in color from a pale to very deep blue. Their natural habitat is in grassland, brushy areas and open woodland, however their range is from California to Southern Oregon, not reaching into Washington. They are not difficult to grow here and will do well in the same garden conditions as Dichelostemma. Also edible, the Native Americans knew full well that they had lots of competition for the corms (which had a similar taste to potatoes.) From very small rodents all the way up to deer, they were sought out for quick, dense nutrition.

Did you know? Botanical Naming Convention:

Both of these plants have descriptive species names. ‘Congestum’ – means congested or crowded and ‘laxa’ means lax or slack.Both of these names describe the inflorescence, or flower arrangement.