Most animals leave ferns alone but not crazy humans! What’s eaten here? The fiddleheads – the wonderful spiral of uncurling fronds in early spring. If clipped before it uncoils too much, the tips (croziers) are tasty with a crunchy nutty type of flavor. Try one or two next spring but here’s the rub; too many and they have been implicated as carcinogenic. Sauteed fiddleheads used to be offered as a springtime treat at local restaurants including the Space Needle restaurant. A better culinary use would be to use the fronds in a pit over salmon to create a moist oven effect such as indigenous people still do on occasions. 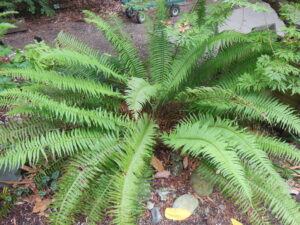