How I Spend My Summer Vacation 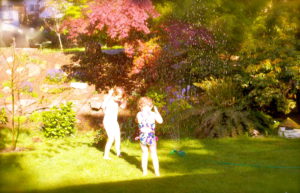 It tends to be dry around here in August. I nurture a few carefully chosen potted plants (just to give a bit of color to the graying, neglected wood of the deck) and without an irrigation system, I become a slave to watering during a normal Pacific Northwest summer. During my summer vacation, I try to keep my “hardy” jasmine alive. I am descended from a long line of mid-west women who feel strongly that a woman must produce tomatoes, so I try to do that, too, whatever the challenges in this climate. And I prune. That’s really what I want to talk to you about.

I mention the summer drought in connection with this discussion of pruning, because I am not the only one who suffers. Our plants suffer, too. Those natives, so acclimatized to our wet winters, must also cope with our dry summers. They become more vulnerable as they gasp for water and endure the sun. We must bear this in mind as we prune. A previously shaded tree bark suddenly exposed to the rigors of the season may burn as badly as we would under the same conditions. We must go easy.

Still, there’s lots to do. You can always take care of the “3-D’s”; dead, damaged and diseased branches. That hardly counts as pruning at all. And guess what? You can actually see deadwood in the summer! That’s right, the dead branches have no leaves! You can also remove the growth we call “deranged,” the fourth D. This includes rootstock suckers of grafted shrubs and trees, adventitious growth from other plants that are prone to such growth—water-sprouts that stick straight up from an apple tree branch, for example; or I think of my filbert tree, which clearly wants to be a forest and which takes every opportunity to send out little baby trees from its base. You know what plants I mean: dogwoods, magnolias, witch hazel, cotoneaster, viburnum, cherries, crabapples, and plums.

Also, you can take out reversions (like when you have a beautiful variegated Euonymus fortunei that’s coming out all green). By the way, over-pruning can cause more water-sprouts than it solves, it’s just that plant retaliation is less severe in the summer than at some other time of year. It is said that summer pruning represses, rather than encourages growth.

There is another good reason to prune cherries in the summer. They are susceptible to fungal and bacterial diseases that are spread by moisture. Just be careful. A poor pruning cut too late in the season might invite other problems (please read about the cherry bark tortrix, but have a stiff drink first, you’ll need it).

As long as we are talking about fruit trees, your apple and pear trees will produce better fruits with a little thinning.

Take a look at your landscape. With the foliage there, it’s a good time to see how the plants look next to each other. You can take out a bit of the plants that seem to be taking over. You can shape your shrubs a bit. I know none of you would overplant, but if the previous owner of your home put in, I don’t know, say a rhododendron that is going to be too big for the space, this is the time to deal with it. After the rhody has finished blooming, it sends up new vegetative shoots. Is it really pruning if you just snap them off? Whatever it is, you can do it now.

We are practicing what we preach here at the Kruckeberg Botanic Garden. As Executive Director Brianne says, “The top of summer is when our garden gets the most light, so we can tell where the most pruning needs to be done…and we’re doing it!  Pruning doesn’t have to be significant to make a difference. At KBG, our aim is to remove the branches that aren’t missed. If you come to the garden and don’t notice that we’ve done anything at all, then we did our job correctly!”

So prune away; and you and your plants try to stay hydrated.