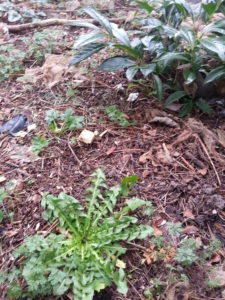 I learn more about God

From weeds than from roses;

Through the smallest chink of hope

In the absolute of concrete….

I am reading a book called My Weeds; A Gardener’s Botany, by Sara Stein. She doesn’t live around here, so it doesn’t have total application to our northwest gardens. Still, it’s a great book. She has done her research, and she writes with humor and poetry. She says that, “A weed is a plant that is not only in the wrong place, but intends to stay.”

I never thought much about weeds, except to curse quietly at the persistent buttercup and bindweed in my yard. (Note picture of my heavily mulched bed, with Stinky Bob, dandelion, buttercup, and spurge daphne.)

Did you know that weeds can tell you what kind of soil you have? Yep. They can. Not that there was much doubt. You live in the Pacific Northwest, don’t you? If you have clay, you will find plantain, nettle, and quack grass in your garden. If you have sand, you will likely also have horsetail. If you have moisture, you probably also have buttercup and dock. If you have acidity, which I’ll lay odds you do, you will have sorrel, and all of the above. When you have low nitrogen, you get vetch and clover. If you also have enough time and foresight, you can harvest these weeds before the seeds form, and compost them, and add them back to the soil. According to Louise Riotte, author of Carrots Love Tomatoes, weeds appear to “accumulate the nutrients in which a particular soil is deficient.” You’d have to have more patience than I have to test this theory. It’s hard to catch the little buggers before they reproduce. Every year, for example, I promise myself I’ll get on top of that nasty shotweed, which you might know as bittercress, or by its scientific name, Cardamine hirsute. I have yet to get it all out before it goes to seed, which is the only way to eradicate it.

“Life cycle: winter annual; Most prolific from late fall through early spring.  This weed is most problematic in propagation and overwintering.  Despite being a winter annual, bittercress will germinate and grow throughout the year due to the cool environment provided by daily overhead irrigation.”

I guess that means it rains a lot here. I try to pull it before it goes to seed, but somehow I never get it all, and sure enough, as I try to wrap my hand around the top, it pops up its seeds into my face, and all over my beds. I have no idea what that says about my soil. (That it’s virtually untended?)

So what’s a gardener to do? Well, now’s the time, folks. You have to utilize the two weeks of sun we get every winter, and probably some of the rainy time, too, and get out there and dig up those suckers. You have to use a tool that will help you get under the root system and lift it all out. Each weed presents its own little opportunity. From the seed-spitters to the plants that can reproduce themselves from a little scrap of root, you have to get all you can out of your bed, then you have to mulch several inches (a layer or two of cardboard can help) and you have to get out there again in a couple of weeks and remove the ones that force their way up through all the stuff you put down. It’s a never-ending battle, so it helps if you dress warmly, and convince yourself it’s a form of meditation.

It’s an inconvenience for the average gardener, but it’s a real hardship for the average farmer. Weeds take more than their share of nutrients from the soil, and time and time again they find clever ways to adapt to all the weed control methods we come up with. Weeds are destroying our native habitat, as well. Our sweet imports of English ivy and Himalayan blackberry are causing terrible problems.

According to the Washington Invasive Species Council at: http://www.invasivespecies.wa.gov/priorities/himalayan_blackberry.shtml

“Native to Asia, the Himalayan blackberry is an evergreen shrub with canes covered in thorns and berries that are edible for humans. It can grow in a variety of environments and often is found along roadsides, riverbanks, parks, and other disturbed areas. Himalayan blackberry shades out smaller, native species, reducing native plant and wildlife diversity.”

So be careful what you plant, and for heaven’s sake try to get rid of the awful stuff that produces fruit that birds eat and then distribute seeds where they’re not wanted, and where they intend to stay. One thing you can do is visit the Kruckeberg Botanic Garden, and find some native plants that you like. They are far less likely to do any harm, and they will bring you, and everyone who sees them, a lot of pleasure.