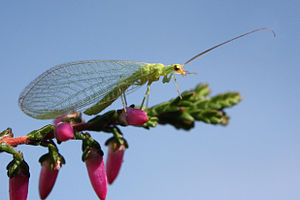 As promised, Part 2 of my interview with Ciscoe Morris. This half of the interview focused on sustainability.

Ciscoe told me how at the age of ten he was hired as a lawn boy at his church, and worked under gardener Joe. Joe taught Ciscoe how to avoid poisons in the garden. He learned to work with nature and not against it. He had to learn about pests in order to make it easier to garden without poisons, and that had an affect on him in later years.

When he went to work for Seattle University nobody was using organic, or IPM [Integrated Pest Management] gardening. Ciscoe talked the university administration into letting him handle the pest control, and he didn’t want to go the pesticide-spraying route. He had just become a Master Gardener and had learned IPM.

“We were one of the first universities that used it. I released thousands of lacewings! Once we got into it we didn’t use any poisons at all, other than oils, soap, vinegar—not even any herbicides. We started a program that became a guideline for others.”

Ciscoe won’t claim credit for the increased enrollment at Seattle University, but there is a coincidence of time. Certainly the campus became more beautiful. He gave tours to fine arts classes, and philosophy classes. Job satisfaction went up because it’s more interesting and fun to manage pests without poisons.

“Sustainability was not talked about in school then. No IPM or anything in those days. Literally when we released insects on campus, Administration thought I was out of my mind. I’ll never forget the Vice President when I was trying to get rid of aphids, ‘We’re infested with bugs and this idiot is bringing more.’

Ciscoe had stopped all spraying. “The trees were so covered with aphids anyone walking under got a free ‘dippity doo’ treatment!” He had to find some solution. He told the Vice President he was going to put ladybeetles out, but he did research and found, “They almost always fly away—they will fly two miles away—take care of the problem somewhere else! Lacewings you can buy as larva, so they don’t fly away. They are really effective.”

Ciscoe told me that the trees were full of ants, eating the honeydew (secreted by aphids). Lacewings have feeding tubes, and they move really fast. “She puts her hinder on a leaf and sticky stuff comes out. She lifts it fast, there’s a little string, she lays an egg on top of the string, so it’s held up in the air. The ants can’t find the egg. These guys [the lacewings] are so hungry they gobble each other up if they can find each other, but they run down the string, pick up aphids, suck the juice out like a living milkshake, throw the aphid’s body on their back so they stick, then it’s camouflage, and they sneak by the ants. We put over 20,000 on campus.”

As I’m sure most of you know, Mareen Kruckeberg, Art’s wife, had a natural approach to gardening and propagation alike. She believed strongly that plants did not need synthetic fertilizers or much fertilizer at all to maintain vigor. Instead, Mareen ground eggshells for her ferns and used other homemade soil amendments.   Now, forty-five years later, the MsK Nursery carries on Mareen’s tradition of growing plants sustainably. We use organic fertilizers, mycorrhizal fungi and renewable coconut coir instead of peat. Our organic methods of controlling pests employ the classics, using soap or ammonia sprays, beneficial nematodes, slug traps made out of beer, and other Integrated Pest Management practices.

I admire Kruckebergs so much, but can only aspire to their skill. The best thing about my interview? Ciscoe said, “It’s not brain surgery—even if your plants die, it’s gardening. You learn.” That makes me feel a lot better.