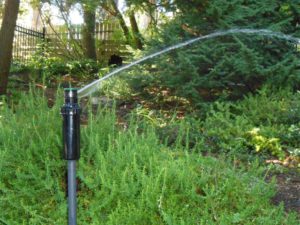 In early July, we installed irrigation in our upper garden area, where the new conditions are hotter and drier than they have been historically due to the new parking lot.This project was long overdue at KBG. We decided to install a residential-grade system, and we were impressed by how simple the process was!We thought we’d share with you some of the things we learned, so you can install a small system of your own. 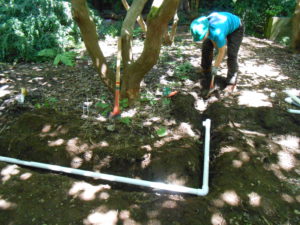 Firstly, draw out an approximate plan where you want the water to go, and identify the location of the sprinkler heads (they can reach approximately 45 feet).Be aware that there are many ways to get to a location, so do some reconnaissance first to make sure that you are choosing a trench location which impacts the least amount of plants and roots.With our list in hand, we went to the hardware store to pick up all the pieces.The system we ultimately built cost a little over $300.

Before we started, we made sure that everyone had the appropriate protective equipment. Since we were going to be using saws, shovels, and glue that might irritate the skin, the Earthcorps crew had boots, long sleeves, pants, and gloves to protect the feet, skin, and hands. We encourage you to do the same! 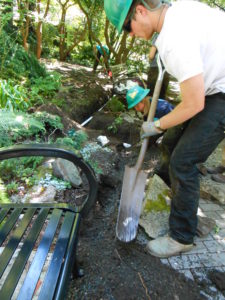 To start, Rowland gave us a quick training on cutting the PVC pipe to length and the priming and gluing steps. The pipe should be placed about 1 – 1.5 feet deep. Once the trench has been dug, put the pipes in place. The pipes come in length of 10 ft, so note that you’ll need to buy enough connectors or joints or corners to reach your final location.We also added shutoff valves at various locations to give us the flexibility to not have to water all the areas at the same time, so you may consider doing something similar. For example, the sprinkler at the rock garden is usually set to “off” to prevent overwatering that area. Once we confirmed that the pipes were the right size and shape for the area, we used the primer and glue to make the system permanent. Make sure to let the system dry for at least 30 minutes before testing the water. One thing that Rowland taught us was that water, particularly water from a well, brings sediment with it.So, make sure to connect sprinklers perpindicular to the main trunk of the irrigation system using a T-joint, rather than connecting it to the end of the pipe. Sediment will accumulate at the end of a pipe, so you don’t want the sediment accumulating at the sprinkler itself.

See the photos of how we placed our pipes along the walkway and on the edges of paths that were already impacted.

We are very happy with our new irrigation system.A big thank you goes out to Earthcorps for the many hands that made light work.We now can water most of the upper garden with only a twist of a handle! In the next few weeks, we’ll provide some information on our slightly more temporary irrigation system installed in the Native Plant Demonstration Garden.