Ron Finley is an urban gardener and community activist/ organizer in South Central L.A., where he grew up with seven siblings. His early career began in fashion design, which was quite successful, but once the recession hit, his business collapsed. In 2010, he decided to plant the parkway (what we call the ‘parking strip’ here in Seattle) with fruits and vegetables. The city owns these little strips of land, yet requires the residents to maintain them. Ron was sick of seeing all the inequities in his neighborhood, the food ‘deserts’, liquor stores, gun shops, and fast food joints, and decided to plant his own food. This small act of resistance began a whole movement that has inspired many new gardeners, in the city and beyond.

At first, the city of L.A. was not on board with his garden, and
actually gave him a citation for what he planted. Ron petitioned
the city, and was able to get them to change the law. In 2013, he
gave a TED talk, that has received over 3.5 million views, all about guerilla/ gansta gardening, as he calls it:“Let’s all become gangsta gardeners … If you ain’t a gardener, you ain’t gangsta”. He likens his work to graffiti, describing Mother Nature as “the greatest artist out there” (The Guardian, 2020).

After Ron Finley gave his TED talk, he established The Ron Finley project, a non-profit that helps
“transform food deserts into food sanctuaries, and teaching individuals how to regenerate their
lands into creative business models” (Ron Finley Project, 2021). His continued efforts inspire many
disenfranchised community members to garden, and grow, and create the world they want to live
in. In 2020, during a the worldwide Pandemic, he did a Masterclass online class on ‘Growing your own food’, which has been one of their most popular classes. He continues to grow and thrive in his community. 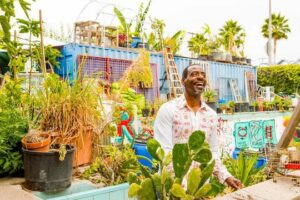 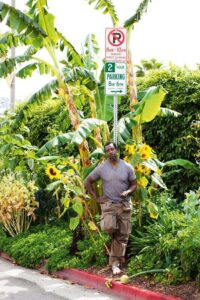 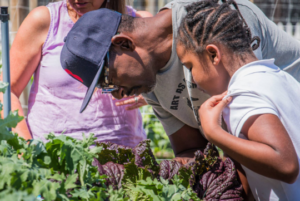 Learn More about the Ron Finley Project!
Click here to learn more about Juneteenth at the Garden: Celebrating Black Botanists