The American Bottle Tree has a rich history in Americana that reaches back to Africa and tracks with the story of slavery in the southern US and more recently adopted as garden art in today’s backyards.

The belief that spirits lived in glass bottles dates back to 1600 BC in Africa, Egypt and Mesopotamia. Bottle trees date back to ninth-century Africa and resurfaced in the early southern plantations by way of Africans sold into slavery.

Bottle trees with bottles inverted or hung on tree branches evolved as a practice in Black southern communities to trap evil spirits within for the morning sun to destroy. The tree of choice was the crape myrtle which was significant for slaves because in the Old Testament it symbolized escape and freedom.

At first, the bottles were typically colored cobalt blue because the color blue was associated with spirits and ghosts but over time other colors were used. Bottle trees at crossroads placed to capture travelling evil spirits were common in the rural roads in the southern states before the interstate highway system was built. Today many gardens across the US have decorative bottle trees. It is hoped that the legacy of their origin is not lost. 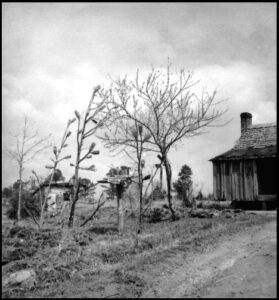 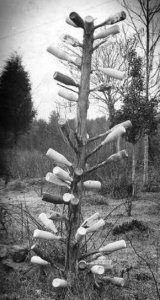 When the wind blows through, the tree shakes.
The glass bottles tip their sunlight
Over a stiff hearth of twilight;
Sealing its glow as night awakes.

Two silhouettes do gives and takes
In drums of waltz down blue moonlight.
When the wind blows through, the tree shakes.
The glass bottles tip their sunlight
Over a rusted dawn’s mistakes.

Their promises dimmed from sight;
Glints of shard hidden for the night.
Soon they’ll be swept up in God’s rakes.
When the wind blows through, the tree shakes.

Learn more about Juneteenth at the Garden: Celebrating Black Botanists

Written by Rissa Sanchez, KGBF Board