Juneteenth celebrates the emancipation of Black slaves in the U.S. following the civil war. While Lincoln’s Emancipation Proclamation had officially outlawed slavery more than two years earlier, Juneteenth commemorates June 19th, 1865 when emancipation was officially enforced in Texas, one of the last slave-owning states.

In recognition of this holiday, the Kruckeberg Botanic Garden Foundation has created a display featuring a few of the many Black figures in the fields of botany, plant ecology, farming, and gardening. Through this display, we aim to raise awareness of the diversity within these fields, and highlight Black success in our local community and beyond.

While at first the connection between botany and emancipation may not be clear, the history of botany and farming in the U.S. has deep roots within the transatlantic slave trade. Black botanists and their accomplishments have often been underrecognized. Farming and gardening often focus on Eurocentric methods, devaluing practices of other regions and cultures. For example, many traditional foods we eat today have their origin in African agriculture (yams, okra, black-eyed peas, and palm oil). Yet to this day, many Black communities across the U.S. lack access to parks, gardens, and farm spaces and the benefits they provide.

This series of essays, pictures, and art will be on display in the Lower Garden throughout the Summer of 2021.

Visit us Fridays, Saturdays, and Sundays 10 am - 5 pm, admission is always free! 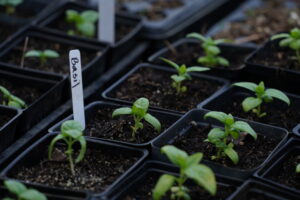