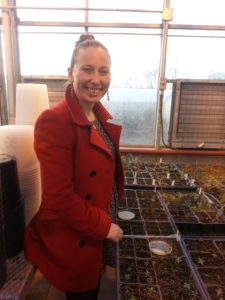 Recently I had the pleasure of talking with Natalie Footen, a PhD student at the University of Washington’s School of Environmental and Forest Sciences. Her work focuses on our native golden paintbrush, or golden Indian paintbrush, Castilleja levisecta, in the broomrape family (Orobanchaceae).

Did you know that Washington State has prairies? Did you know they are endangered? Western Washington used to have about a quarter-million acres of native prairie; now we have only several thousand acres.

There are small prairies in northeast Washington and on parts of the San Juan Islands. These native grasslands have dwindled because of agricultural and urban development, tree encroachment, and invasive plants. Plants like our golden paintbrush, butterflies and other native prairie creatures are dying off due to pesticides, recreation, and farm grazing. There’s another factor; early Washington inhabitants deliberately set fires to maintain the prairies. Now we tend to suppress fires. It is possible that fires help promote certain species because fires clear out taller vegetation that would otherwise compete with it, or perhaps fire provides it nutrients in the ash.

Our golden paintbrush is especially important because there’s a native butterfly (Taylor’s checkerspot, Euphydryas editha taylori) that lays its eggs on it. The larva also eat the leaves when they hatch. If we save the paintbrush, we save the butterflies as well.

Natalie works at the Center for Urban Horticulture, which is part of the University of Washington. We went to the greenhouse and

Natalie showed me some of the “companion plants” she is growing. “We want to end up with a large number of native prairie plants, and a lot of biodiversity. Parasitic plants may help us do this by acting like mediators and taking resources from large, dominant plants, which frees up more space for less-competitive plants to move in and grow, allowing many plants to live together in a shared space, and more species overall.”

Natalie is trying to find out what host plants the paintbrush likes. “Everybody already knew that there are two hosts, Roemer’s fescue (Festuca roemeri) and Oregon sunshine (Eriophyllum lanatum)… We suspect a much wider range of hosts, but nobody’s tested it. It occurred to me that lupins are by design good hosts, because they are nitrogen fixers.” That means that lupins take up nitrogen from the atmosphere and put it back in the soil when they die or shed leaves.

“Castilleja is a hemi-parasite. It can photosynthesize but it’s still a parasite. It’s less worried about carbon than about nitrogen and water. Prairies are nitrogen limited, with nutrient poor soil. Paintbrush has dinky little roots, so they are going to attach to other plants.”

Are you interested in seeing a built prairie on a small scale? Visit the Native Plant Demonstration Garden at KBG mid April to early May when it will be in full bloom. We have several specimens of Castilleja growing there. What species are they planted alongside? How are they doing?