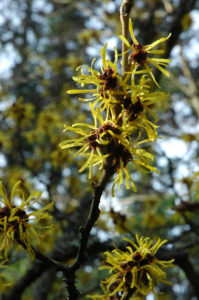 The heady, hollied rush toward Christmas is over. One by one you took down the ornaments, and packed them away. Why is it so much more fun to put them on the tree than to take them off? The tree is in the compost bin, the leaves of the poinsettia fall like a gentle rain upon the dining room table; sans buche noel, sans pie, sans tablecloth,which was sent cranberry-stained to the laundry. You hate to do it, but that Euphorbia pulcherrima is going in the bin right next to the tree.

The cheery blink of the alternating lights is a memory tucked back in a dusty box in the basement. The living room is restored to its former—why not admit it?—dull and shabby existence. You pluck dried needles out of your carpets and gaze out your windows at the gray expanse of your frozen yard; sighing, and tossing the dog-eared seed catalogues onto the coffee table. It’s a month and a half before the NW Flower and Garden Show. Is there any point in getting up in the morning?

I have not always admired Ikebana. I have been more in sympathy with Beverley Nichols as he made sneering reference to “Our Rose” in his book Merry Hall. (If you are not acquainted with Beverley Nichols, you ought to be. Merry Hall is at the library, go get it and read it. Parts will offend you; he was an awful misogynist and prey to the prejudices of his time, but he was also very funny.) “Our Rose” as he called his meddlesome and opinionated neighbor, was given to the very inartistic torture of cut flowers with wire and string. I have looked at pictures of Ikebana that made me cringe for the poor plants that, in my ignorant view, were being forced into unnatural submission to an even more unnatural notion of beauty. I was wrong. The more I learn about the art, the more I admire it.

Ikebana (“living flowers”) began in India, spread to Korea, then China, then Japan around 540 B.C. It was an art practiced by Buddhist monks as an expression of the beauty of nature. It has spread to the rest of Japan and to the world, and it is expressed in many styles. There are thousands of videos, books, and schools of instruction for Ikebana. The oldest school is Ikenobo. The Kyoto Visitors Guide (http://www.kyotoguide.com/ver2/thismonth/ikebana.html) gives an overview of the history of the art, which makes sense, as Kyoto is considered the birthplace of Ikebana. The Visitors Guide also has a picture of the oldest living Ikebana textbook, dating from the late 15th century. As the guide explains, Ikebana is the representation of the Japanese love of nature, tranquility and perfection. The beauty of a flower arrangement lies in its asymmetrical balance, respect for the individual flower and harmony with nature as a whole. It is more than simply putting flowers in a container. It is a disciplined art form in which the arrangement is a living thing where nature and humanity are brought together.

All of the schools of Ikebana have common principles. There are the relationships between nature and space, and the use of “empty” space. Ikebana is based on a scalene triangle (each side is a different length). Heaven, earth, and man are the three elements represented in all major schools. (Well, apparently, in some schools the three elements are sun, moon, and earth.) There is the creation of a piece that fits its environment. There is the expression of the designer’s self.

Here in the west we create lush, lavish bouquets of hothouse flowers that are meant to be admired from all sides. Think of the huge bouquets you can buy at Pike Place Market in the summer. Or for that matter, think of Martha Stewart with her signature full but tightly bound bouquets of white/green blossoms. That is not the case with Ikebana. The “empty” space is as important as the space with flowers, stems, or other natural elements.

Unlike some western bouquets, which might be used as dining room table centerpieces, Ikebana is not the same piece of art on all sides. A Tolonoma is a sacred alcove in a Japanese room. During the Kamakura period (1192-1333) the Samurai brought lifestyle changes into Japanese society. It became fashionable to create a Tokonoma to receive guests. It often had a flower arrangement, incense, and a candle. The flower arrangement—an Ikebana arrangement—was meant to be viewed only from the front.

There are other differences in philosophy between Ikebana and western flower arranging. The other day I was helping a woman find a plant for a memorial offering. She chose a Peace Lily, but then spent half an hour wiping each leaf with a damp cloth, and pinching off the tiny ends of the leaves that she saw as brown and damaged. I tried to suggest, as tactfully as I could, that she might better choose an artificial arrangement. A living plant is never “perfect”. Or perhaps it is. It is perfectly what it is. An Ikebana arrangement may celebrate nature by using a leaf that is damaged by insects—the leaf was chosen by the insects for its perfection, and it shows a balance of nature that deserves to be admired. Our own Roseann Beaudry reminds me that witch hazel branches, especially the ones with lichen, make wonderful subjects for an arrangement. (Thus today’s photo!)

Advice for the New Year? Make new friends, stay warm, and be open to beauty where you find it.