The Trumpet of a Prophesy! 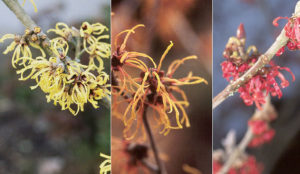 The trumpet of a prophecy! O Wind,

If Winter comes, can Spring be far behind?

From: Ode to the West Wind, by Percy Bysshe Shelley

You know what else is the trumpet of a prophecy of spring?  Hamamelis. You see it above, a picture of three different kinds of witchhazel from that marvelous website—Oregon State University Landscape Plants. http://oregonstate.edu/dept/ldplants/

Here at Kruckeberg Botanic Garden our very own Hamamelis mollis is in bloom by the path near the parking lot. The Van Gogh-ish flowers in starry clusters are hard to miss. You may catch a scent of spring when you walk past; the flowers are delicately fragrant. We have Hamamelis x intermedia further in. Ask if you don’t see it when you walk through.

Witchhazel is deciduous, and it can get up to 20 feet tall. It isn’t densely branched; it has an open appearance. The leaves often have wavy margins and are deeply veined. They turn yellow to red in fall, depending on the cultivar. They bloom in winter or early spring. It likes sun to part shade, and is generally free of insects and diseases.

We all know of the astringent lotion “witch hazel” (astringent means it shrinks tissues). It was used by Native Americans for medicinal purposes, and is used that way today.  The Food and Drug Administration approve it for treating sores, minor lacerations, sprains, and tired and puffy eyes. We get the liquid much the same way people always got it—the stems are steamed or boiled and the resulting liquid is used.

There is legend surrounding the plant. The term “witch” comes from the old English “wice”, meaning pliant or bendable. American colonists used an elm tree to divine the presence of water back home, and transferred the practice to the witch hazel (Hamamelis virginiana) when they got here. (I wonder if it’s because an elm leaf has a wavy margin and is deeply veined? They do look something alike.) Legend has it that one could use the hazel tree to locate both wealth and water. It was believed that the divining rod had to have grown so that one of the forks faced north and the other south so that it was exposed to the rising and the setting sun. With a fork in each hand, the “dowser” (water finder) let the branch feel the “pull” of hidden water and bend in that direction.

I will tell you something strange but true; when my husband, Howard, was in the Peace Corps in Togo many years ago, he was a dowser. I am not making this up. Only he said he used a mango branch for his water witching. He is not so singular as you might think. Our own Roseann had an uncle who was a dowser, and three days ago I mentioned the witchhazel to a woman I had just met, and her grandfather was a dowser. The legend continues!