Whenever I come to the garden, it’s such a relief on a hot day to step into the cool forest immediately after the parking lot. It sets the stage that this is primarily a shaded garden. Many of the lower plants, shrubs, and groundcovers reflect this preference. Where openings allow sunlight even for a short time, flowers are set and add a splash of color to an otherwise green palette.

I was reminded of this recently coming across a good-sized rhododendron blooming its head away just below the state champion tanbark oak. It hadn’t bloomed for years but due to some thinning of the canopy trees, it was making up for lost time. The staff came up with the cultivar name ‘Abendsonne’. I was unfamiliar with this cultivar but investigation revealed it to be a hybrid from the hand of Dietrich Hobbie (1899-1985). Basically self-taught, this nurseryman working for an estate outside Hamburg, visited Exbury and other English estates in the 1930’s and got seed and advice which he put to use creating over 600 different crosses in his lifetime. ‘Elizabeth Hobbie’ named for his wife was his favorite; ‘Baden Baden’, another dwarf red used to be in the trade, too.

Close by are a batch of shade-loving groundcovers. Just finishing blooming and now setting seed is Vancouveria hexandra, sometimes called ‘inside-out flower’ due to the white petals being pulled backward it seems. Usually deciduous but there are almost evergreen forms, it can be found in the western sides of Washington and Oregon with extensions into s.w. British Columbia and n.w. California. The wiry stems rise to 10 – 20”; it spreads by underground rhizomes but never as dense as its relative in the barberry family, the Epimedium.

A few feet away is a small growing knotweed, Persicaria capitata. One common name is Pinkhead knotweed but here in the shade, the rounded flower heads are basically white. Here’s a plant that needs careful siting as it could spread by underground runners and by seed well beyond your boundaries. Usually deciduous, it tolerates both damp and dry sites. Bees love it and some folks gather the seeds to grind into a flour.

Much more desirable for the native woodland garden is the false lily of the valley, Maianthemum dilatatum to be found from northern California to lower British Columbia. It is deciduous, that is, it’ll die back to the underground roots come late fall. Come spring though
and pure white blossoms will peek out amongst the twisted leaves. At this season, we’ll start to see small red berries that wildlife will find as they forage. They are safe for human consumption; native American children would pop green, unripe fruits into their mouths. 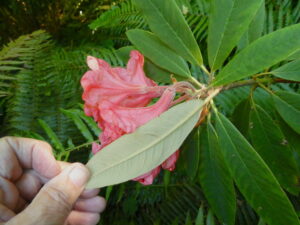 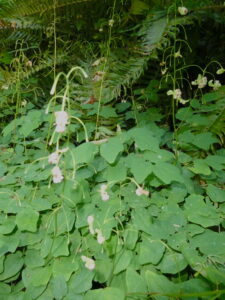 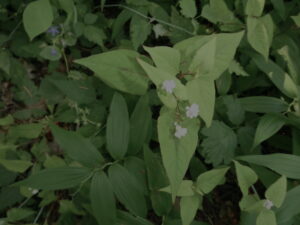 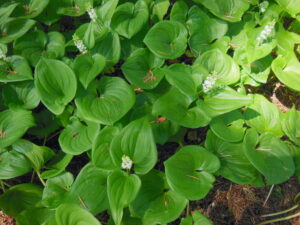