Walt’s Notes from the Garden

I had intended to venture into the garden after Thanksgiving to gather ideas on another article. Well, it was closed for the holiday but then it gave me a chance to take a better look at the plants along the front. Normally, these are not given much attention when you drive in and plunge into the garden proper. Nonetheless, there are some plants here not found inside that warrant a second look.

Blooming right now is a large Silverberry, Elaeagnus pungens, with very fragrant, even if small white tubular blossoms. Reddish fruits, about ½” long, are coated with small, silvery scales giving it a frosted look and thus the common name. These scales also appear on the new leaves but wear off as the year progresses. If you look inside, you should see the large stout thorns that curve backward. These thorns are infrequent but could catch your arm if you’re reaching inside during pruning just like a fishhook. Bent backward, they’re an effective hooking device for the plant to clamber upward into other plants. Out in the open, silverberry will normally grow to 8’ by 12’. Variegated forms of this and a similar species, Elaeagnus ebbingei, are in the trade to help lighten up dark corners or just to show off.

Look underneath and you’ll see a number of sizeable vines that disappear into the silverberry. Stand back and look upward over the silverberry and you’ll see where the vines reach sunlight. No leaves now but in spring and summer you’ll see large circular leaves of the kiwi vine, Actinidia deliciosa. Here’s a plant that is associated now with New Zealand but an earlier, now invalid name, name (A. chinensis) tells of its true geographic origins. Story is that during WW II, New Zealand troops fighting in the lowland jungles of S.E. Asia found the fruit to be quite tasty and a helpful aid to sometimes limited food rations. After the war, some remembered the fruit and introduced it into New Zealand, but they had a problem selling it as the then common name, Chinese Gooseberry. Finally, someone came up with the idea to market it as Kiwi, a takeoff of what they called themselves. And the rest is history.

Actually, since Kiwi vine is dioecious with female and male flowers on separate plants, there could be the two sexes planted together here. Bring binoculars next year!

More on the front in the next issue. 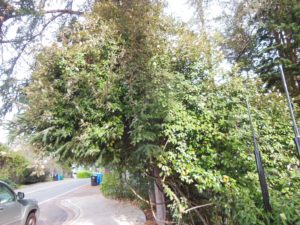 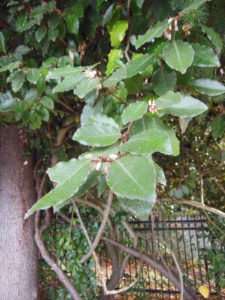 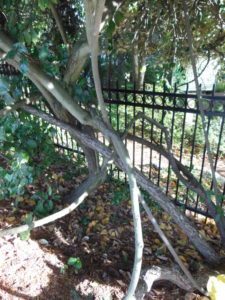 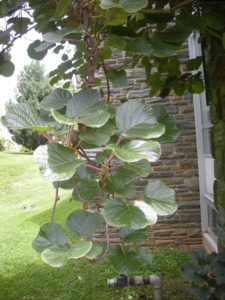