Most of the plants here are hardy and time-tested even after our frozen bout last month. Art and Mareen did like to experiment like many of us so I went looking for an unusual plant they had planted from seed from South Africa. Selago corybosa is in the Scrophularicaceae family which has snapdragons in it. I didn’t spot it but hope it survived as an underground rootmass and will re-appear with warmer weather.

When I taught Plant Diseases in regard to plant hardiness, I advised students to be patient in determining whether or not a plant had survived the winter. A personal example to me was seeing the dead foliage of the evergreen shrub Rhapiolepis indica (sometimes called Indian Hawthorn) but not getting around to removing the entire plant which I assumed was dead. Imagine my surprise when I did see new sprouts emerging from the stump. The day was the 4th of July and it seemed appropriate from then on to say just wait until there’s a good date as a reminder.

I always look forward to seeing the first blossoms of our native Oso Berry, née Indian Plum, (Oemleria cerasiformis). Some folks will get a scent but it eludes me; what doesn’t is the cucumber smell from rubbing the leaves. Similar at first glance are the male and female blossoms, each on separate plants, a condition known as being dioecious meaning two houses (di- for two, oecious- for house). Look carefully at whether you see only a solitary pistil ready to receive pollen or a batch of stamens waiting for an early March fly to get some pollen on its hairs while absorbing some nectar in its sponge-like mouthparts. Normally, Oso Berry stays below 10’ as a multiple stemmed shrub. Older ones get more tree-like and more than double that in height along with attractive flaky cinnamon-colored bark.

Crocus and Cyclamen are emerging as well as various bulbs. Without leaves from the deciduous trees, sunlight heats up the soil or leaf mulch that is the signal for ground level plants. Rapid growth is the key to their future survival now.

Haze – you see haze right now on a number of plants. It’s actually the new buds and leaves in miniature that are emerging from their winter sleep. The overall effect is often different in color than their mature foliage. Down in the native garden area is the shrub known as buffalo berry (Shepherdia canadensis). Right now, it’s a beautiful warm brown that later will be gone with the full grown dark green leaves. The berries of this plant are used to make sopallaly, a mixture of the berries whisked into a froth along with salal berries to sweeten the creamy dish. Indigenous peoples of eastern Washington and British Columbia still make it as did their ancestors.

Do visit the garden soon to see the daily changes yourself. 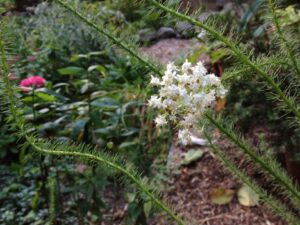 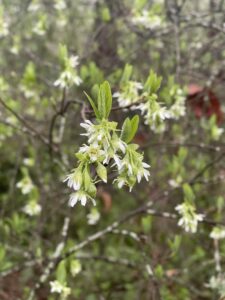 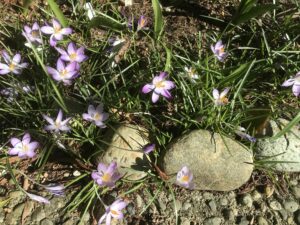 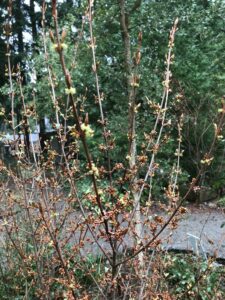