Walt’s Notes From The Garden

Spring is advancing now with more warmer days than not. I had a chance to visit the garden recently and was struck by how well the early bloomers, often referred to as ephemerals, look. The cool nights help keep some of these blooming longer than usual. A bumper crop of seeds should result this year from the longer time flowers are available for visits by pollinators.

The deciduous trees and shrubs are filling out quickly these days, but earlier was the time for the ephemerals to do their thing. Dappled light now is greedily absorbed by the newly emerging leaves since soon they’ll be in dense shade. Photosynthesis then will become more of a maintenance factor rather than a growth factor.

So what’s pollinating these early bloomers? For our natives, it’s a variety of things, some non-insect. Slugs and snails have been implicated in mushing pollen around the ground level blossoms of ground ginger (Asarum caudatum) for example. Hummingbirds are aiding pollination of such plants as our red flowering currant (Ribes sanguineum) and Oregon grapes (Mahonia aquifolium and M. nervosa among others). Bees will visit these too as do various flies. An early large-bodied slow fly called the March fly is an important contributor to the effort.

Most of our early ephemerals’ flowers are light in color ranging from greens to light toned yellows and whites. A prime example is fragrant fringecup (Tellima grandiflora), which spreads happily through the lower garden. Small and greenish blossoms are seen on oval-leaved miterwort (Mitella ovalis). Some white blossoms really stand out, such as the dwarf dogwood or bunchberry (Cornus unalaschkensis) and star Solomon’s seal (Maianthemum stellatum). In any case, the light colored plants of early spring depend upon nocturnal pollinators such as beetles and moths who are attracted to subtle fragrances and/or luminescence of white petals.

Anything not light colored then really catches the eye. The red of salmonberry (rubus spectabilis) is gorgeous in its own right and later valued for easy picking along hiking trails. There is a double-petaled form available in the nursery trade but like many double flowered forms it’s lacking the stigma and anthers, thus non-fruitful. Just a pretty face in the garden! A native corydalis (C. scouleri) also catches the eye if you’re in a moist site. Seek these out when you can and see if they can be used in your garden. Check to see if these are available on-line from the nursery too. 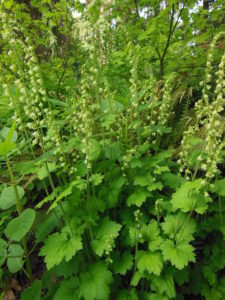 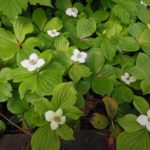 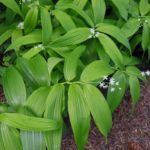 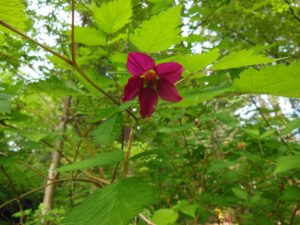