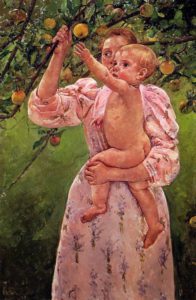 I hope you are planning to come and see us for the 27th Annual Mother’s Day Plant Sale. For one thing, a plant makes a great gift! (If you are a mother, you should make someone else come along to buy you a plant.)

Anna Jarvis is considered the mother of Mother’s Day. Her own mother, Ann Reeves Jarvis, was a peace activist who cared for wounded soldiers on both sides of the Civil War. She organized “Mother’s Day Work Clubs” to focus on public health care issues.

After her death in 1905, daughter Anna Jarvis advocated for a national day in honor of mothers. In 1908, Anna Jarvis arranged for 500 white carnations to be handed to mothers in the Andrews Methodist Episcopal Church in Grafton, West Virginia, where her mother had taught Sunday school.

West Virginia Gov. William E. Glasscock was the first to issue a Mother’s Day proclamation, in 1910—but in 1914, President Woodrow Wilson designated the second Sunday in May as “Mother’s Day”, and a national holiday was born. Poor Anna. She hoped for a sweet holiday where children would honor their mothers during a visit, or in a letter. Instead she lived to see the American spirit of enterprise produce another multi-million dollar industry.

Mother’s Day is not original with the USA. In the United Kingdom, there is “Mothering Sunday.” As early as the 1600s, servants were allowed a rare day off on a Sunday during Lent. It was a day to visit one’s home church (Mother church) and one’s family. Going back even further in history, there was the ancient annual spring festival that the Greeks dedicated to maternal goddesses. The Greeks honored Rhea, wife of Cronus and the mother of many deities.

The Romans celebrated a spring festival called Hilaria (don’t you love that name?) dedicated to Cybele, a mother goddess. The celebration lasted for three days and included parades, games and masquerades. Apparently the celebrations got a little rowdy–followers of Cybele were banished from Rome!

There’s another mother we often think of: Mother Nature. I am preaching to the choir here, I know—you wouldn’t be reading this blog if you didn’t care about living things, and I’ll wager most of you are conservation-minded. I don’t need to tell you that we are running out of potable water, even running out of soil. (How many of you watched “Dirt: The Movie”?) It’s a crisis. It’s a life-threatening crisis right now, maybe not for us yet, but for some. We all need to think hard about sustainability issues—conserving water and tending the soil. What does that mean for the home gardener?

Of course you’ll do what we are all doing—reduce, reuse, recycle. Turn off the lights, turn down the heat. You’ve all read about not over-watering, and about (perhaps) reducing lawn. You know about mulching, and making bio-swales and rain gardens. What else might you do?

I’m as much of a plant geek as anyone. I see a colorful pop of flower, or a lovely swirl of light-green needles, or the prettiest flip-ended tender leaf, and I fall in love. There’s nothing wrong with that; and if we each had one or two plants we spent time and water on, that wouldn’t break the ecological bank. Still, as you are looking for the best gift plant for someone you love (which includes yourself) please think about what will thrive in this region. Native is good—but it doesn’t necessarily have to be native. Think of what might be happy with wet feet all winter and a drought this summer. Think what can grow and be its healthiest and best without using more than its share of natural resources.

This Mother’s Day, remember your mother, your mother-in-law, your grandmothers, your step-mothers, and your daughters, daughters-in-law and sisters who are or who may one day be mothers. Remember the wonderful women in your life who are nurturing without actually having given birth. And please remember Mother Earth.